They had to shut the doors on what has been a respectable and well known boot camp workout center since 2003.  Genesis Fitness won the 2009 ‘best boot camp’ award by Westword.  At their peak they had some of the best talent in Denver working for them.

Then something happened.  I know about the end result, but it’s more the trend of what’s happening that’s worrying me.

I’ve been in the Denver Fitness Market since 2001 now (man that makes me feel old) and something is happening and I don’t like it.

An uncomfortable trend.  A trend that threatens your fitness experience and your choices as you know it.

Earlier in the year, Bodylab Denver shut down.  They had a slightly different small group personal training model, more like the training workouts we do at our Bonza Bodies Fitness studio.  They were just a few blocks down the road from our 18th and broadway location – now I think there’s a lot of business to be had in the 80202 region, so for these guys to shut down had me worried for small group training – as it turns out, our model is thankfully different enough from theirs.  We don’t push quite as hard and spend a bit more effort on injury prevention and individuals goal-focused tweaks within the workouts, which may have saved us.  For now.  To be honest though, it made me wonder if us adding a large group workout piece a la crossfit or something wouldn’t be beneficial for us.  And then, without warning….

Now let’s get something straight.  Genesis had everything they needed to succeed.  A great location, great trainers (he’s left now, but Adam Harris was one of their trainers who had a reputiation that preceded him – http://www.adamharrisfitness.com – he’ a take-no-prisoners kind of Scotsman that will leave you a sweaty mess on the floor (note:  he’s actually Welsh, but me being Australian means I love it when people tell him he’s Welsh about as much as I hate it when people ask me if I’m from South Africa or England).

Genesis Fitness was all about kickass workouts that were brutally intense.  We have a member who is with us at Bonza now who tells it best.  When I asked “why did you leave genesis fitness to come to Bonza bodies” he stated quite clearly that genesis would have killed him if he had kept going.   Now, this gentleman was 40 plus and had a few injuries under his belt – so to be fair, the kind of ‘constant pushing’ as opposed to our ‘strategic gains’ strategy might not have been best for where he had been.  I’ll tell you what Genesis did amazingly well though – community.

Genesis Fitness Had  A Community that were like Family

So much in fact that in late June when Genesis Fitness shut their doors, a group of the members just went out and started up their own thing.  If you go to http://www.getgenfit.com/ you’ll be able to see the makeshift website they’ve put together.  Even though Genesis the club has fallen, the people and their community (at least the diehards) have stuck together.  How long will this transformative effort be able to be maintained?  Let’s hope as long as they can.

I love the members I have now at our lakewood and downtown studios – but I can tell you I would welcome any of these Genesis members with open arms regardless of their physical ability or how hard they ‘crush it on leg day’, because if they have anything, it’s passion and a willingness to join a community and fight for the workout they want.  It feels like the members we have now.  Maybe it’s our members we have combined with our small group approach that has held us over for now.  I mean, I don’t go to bed worrying that we’re shutting down anytime soon, but when all you see is foundations of Denver fitness falling all around you, you gotta wonder if they felt the same way before they fell.

There were a couple of other clubs that have shut down over the last few years, some affected by rulings to park workouts, some by greedy landlords and some by bad or unethical business practices of their own.  But there are a few that have been thriving.  These are divided into two main sections:

I’m talking the big monsters like Corepower, Orange Theory Fitness and big box chains that have the money to build treadmill warehouses with well dressed salespeople.

My one question is this.

Which club will you support?

Jamie Atlas is the owner of Bonza Bodies Fitness, a small fitness studio that focuses on goal-focused workouts in a small group (1-8) environment.  Members of Bonza receive at home workouts, nutrition plans and perosnalized attention towards their goals and care to avoid joint or muscle issues that could hinder progress if agitated.  Bonza Bodies Fitness is a 2 time winner of 5280 Top Of The Town Best Boot Camp and Best Gym, Jamie Atlas is a 4-time winner of Best Personal Trainer and is also a spokesperson for multiple non-profit and values-driven organizations.  You can contact Jamie or ask about a free membership trial on info@bonzabodies.com

By jatlas | Denver Fitness | No Comments

We tore it up on 9News last week for their Workout Wednesday series and have had great feedback from our friends.  As personal trainers, we work on functional training, which means training for everyday body movements. What you learn in the gym should translate into your movement in real life. You twist here, bend there, lift like this, and so on.

I’ll admit, if you’re not a runner (and you’re not frequently being chased), you might not consider running “functional,” but even if your idea of a run is chasing after the kids, there’s a healthy way to train your body for those movements. Here are a few exercises I did with Corey Rose on 9News:

Some of it is about speed, some is about range of motion and, as always, there’s a focus on how the entire body works together. Training for running (or anything) isn’t about isolating a specific muscle group. It’s about total body training to build strength and stamina, and prevent injury.

Give these exercises a try at home, and join us in one of our classes — or at Red Rocks! — for more.

Look! Up in the sky! It’s me, Jamie Atlas (eh-hem, 5280’s Top Personal Trainer) riding a broom! Okay, not really. But I’ve been having a lot of fun with my friends at 9News on their Workout Wednesday series. We’re talking workouts, nutrition, fitness — and fitting it into real, daily lives.

So as part of my functional training philosophy, I like to create workouts that can be done at home, at your desk, in a house, with a mouse… And incorporating whatever you have laying around. If it’s pushups at your desk, lunges while you pick up the kids’ toys or, in this case, a broom. And these exercises have varying levels of intensity.

Check out these simple exercises I taught Corey Rose at 9News. In just three functional movements, we’re getting our heart rates up and activating several parts of the body at the same time.

See? Fitness doesn’t always have to mean going to the gym or hiring a personal trainer. You can get a great workout and a dose of daily activity by getting creative and using what you have. Now, bag up your canned food and go!

By jatlas | Nutrition | No Comments

As trainers, we talk a lot about fitness, functional workouts, weight loss goals and how awesome it is to work out at Red Rocks. But when I’m doing my personal training thing and working with my clients, I also maintain a large focus on nutrition and healthy eating because I understand that a fit and functional body is fit and functional from the inside out. So let’s talk about food.

We all know the old saying that breakfast is the most important meal of the day. You know, because nutrition is important, because it kickstarts your metabolism, fires up the ol’ brain cells and preps you for a day of productivity. And that’s all well and good, but let’s be honest: there’s more to it than that. Breakfast food lives on a bit of a spectrum that I like to break down into red light, yellow light and green light foods. While it’s easy to identify donuts as America’s favorite breakfast– uh, I mean, as a red light, some foods are a little harder to classify.

I recently visited 9News to talk to Corey Rose about breakfast, and brought with me some controversial favorites: eggs, yogurt and oatmeal. Seemingly all green lights, right? I mean, the commercials will tell you so. But here’s what happened when we put them to the test:

Turns out the yogurt was our red light. Why? Because of those sneaky artificial sweeteners that will actually create inflammation in our bodies. How do we convert that to a yellow light food? Eat real yogurt with no sweeteners and add some berries.

Our green light, despite concerns about cholesterol, was the eggs. And oatmeal was the yellow light. So think about that next time you’re bellying up to the breakfast buffet — it’s only the most important meal of the day if you’re making good choices.

By jatlas | Denver Fitness | No Comments

The summer season started out with a lot of questions about the new system for fitness classes at Red Rocks. We’re happy to report that the changes haven’t gotten in the way of good times (for us trainers, anyway [insert diabolical laugh]) and great workouts.

We’re out there doing our thing every Saturday at 8:15 a.m. in small groups of 10. And truth be told, we like it that way. Here’s why: 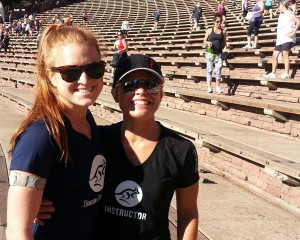 Need more proof? Look at these Bonza bodies, all happy and hardworking and stuff. Then come see for yourself.