Whether you are in the best shape of your life or the worst, it’s in (big) part to your eating habits.  What you put in your body has a direct effect on how the rest of the world sees you, but also a direct effect on brain chemistry, energy and digestion in such that it actually also affects the way YOU see the world.

But don’t fret.  There’s a few different methods I’ve found that work extremely well in helping you get to where you want to be.  The first , to be a “Creature of Habit”:

Not that kind of habit!

Eat the same few meals over and over again

The most successful dieters, regardless of whether their goal is muscle gain or fat loss; eat the same few meals over and over again. The average person has 11 meals they eat on a regular basis. Work hard to find these meals. Once you have an idea, try to eat 5 healthy meals in a row. If you fail at one, start again until you have managed 5 meals that follow the meal plan below. Mix and match your foods, constructing each meal with one from each of the three following groups:

Remove the habit of grabbing an unhealthy snack by cleaning out the (food) closet:

If I wanted to quit smoking cigarettes, one of the first things I would do would be to get rid of all cigarettes in my house. Most of the time our desire to eat foods that are not healthy are driven by impulse, not a legitimate need for that food. If you don’t have that food in the house, then you don’t have that food to eat. Take inventory and throw out foods that don’t fit the new plan. Unsure? At least take a look and discard the worst 4 foods that you have in your house. Chances are just removing those can help a bunch! If you live with someone else who refuses to join you then separate their food so it is out of sight, at least.

Eliminate the habit of quitting in silence – tell someone who cares.

Call a friend and ask them to be your ‘support buddy’. You are starting a new habit and when you feel weak you can call them. Also ask them to be asking you how you are doing. You don’t need them to criticize your choices, just to be someone who they know they will have to look in the eye should you not be following through. This can happen on facebook, via email or in person. Choose one or as many support crew as you would like.

An insider secret to keeping yourself on track:

Whether you are more interested in weight or muscle, a pair of pants or a particular dress or shirt can tell you exactly how you are doing relative to where you want to be.

Put aside a pair of ultimate ‘goal pants’ but also a couple of outfits or shirts that are progressively tighter that work towards your goal. If you can, get yourself weighed and measured so you have numbers that you can compare as you move through your program.  The goal pants are….well, your goal! 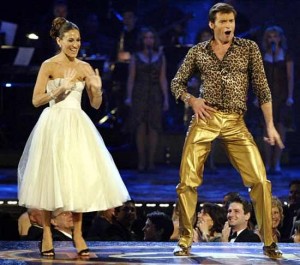 No, Hugh Jackman.. I said GOAL pants.. not gold pants.. ahh, it’s a good thing you’re Australain and can pull that look off…barely.

Your assessment should also include a real world task – maybe it’s hiking a hill, playing a sport or doing a task. Your ease and proficiency at this will help you know that your health is improving in more ways than just the numbers.

No matter what kind of habit you are trying to break, or what you find works best to keep you motivated to be on track, remember that every time you make a decision in the right direction, you’re solidifying that habit and lessening the willpower required to make that habit a part of your lifestyle choices.

With every step forward, you not only get a step closer, but you gain momentum!  And with momentum, you can move worlds (or at least lose a few lbs!)